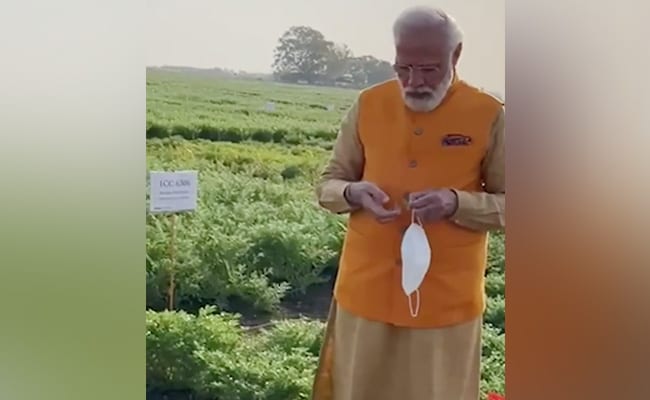 PM Modi stopped near the gram plantations and had some ‘Chana‘.

During his visit to International Crops Research Institute for Semi-Arid Tropics (ICRISAT) in Hyderabad, Prime Minister Narendra Modi walked through the campus on Saturday and tasted some gram (chana) pods directly from the farm.

Prime Minister was in Hyderabad on Saturday to kickstart the 50th-anniversary celebrations of ICRISAT.

At the ICRISAT campus, he walked through the farm and hailed the efforts of the scientists and researchers. While taking a stroll in the gram field, he stopped near the gram plantations and had some ‘Chana‘.

#WATCH | Prime Minister Narendra Modi stops by to have ‘Chana’ at the ICRISAT farm in Hyderabad pic.twitter.com/zQ3ABsHzrr

Taking to Twitter, Prime Minister said, “At the ICRISAT campus, inspected some of the efforts to modernize agriculture and strengthen innovation in this sphere.”

At the ICRISAT campus, inspected some of the efforts to modernise agriculture and strengthen innovation in this sphere. pic.twitter.com/6Ur7REqJ4F

Prior to this, Prime Minister inaugurated ICRISAT’s Climate Change Research Facility on Plant Protection and Rapid Generation Advancement Facility. He also launched a commemorative stamp issued on the occasion.

Addressing the event, Prime Minister Modi said, “To save our farmers from climate challenge, our focus is on the fusion of both ‘Back to basics’ and ‘March to future’. Our focus is on more than 80 per cent of small farmers of the country who need us the most. One important aspect of the changing India is digital agriculture. The Union Budget 2022-23 is focused on natural farming and digital agriculture.”

Referring to 15 Agro-Climatic Zones and six different seasons in India, he said the country has a very diverse and ancient experience related to agricultural practices.

Highlighting India’s commitment to nature conservation, Prime Minister said Pro Planet People is a movement that connects every community, every individual with climate responsibility to tackle the climate challenge.

“This is not limited to just words but is also reflected in the actions of the Government of India. India has urged the world to pay special attention to it to deal with the climate challenge. Not only has India set a target of Net-Zero by 2070, but we have also highlighted the need for LIFE – Lifestyle for Environment,” Prime Minister emphasized.