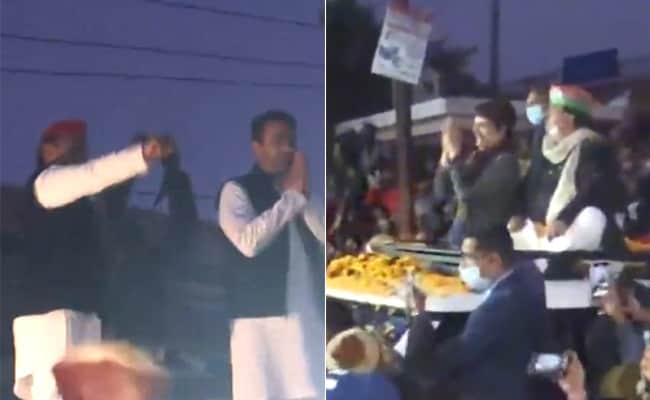 The bonhomie spilled over as supporters of the two parties cheered, waved their flags at each other

Akhilesh Yadav and Priyanka Gandhi Vadra waved at each other when their roadshows crossed paths in Uttar Pradesh’s Bulandhshahr today.

In a video, Priyanka Gandhi is seen grinning and waving at the Samajwadi Party chief, who was in a “rath” or repurposed campaign bus with his ally Jayant Chaudhary, the Rashtriya Lok Dal chief.

#WATCH | Bulandshahr | Congress general secretary Priyanka Gandhi Vadra and SP chief Akhilesh Yadav-RLD chief Jayant Chaudhary wave at and greet each other after they came face to face during their respective election campaigns for #UttarPradeshElection2022pic.twitter.com/OWV3IlKT0v

Both Akhilesh Yadav and Jayant Chaudhary are seen returning the gesture. They also climb the roof of the bus and wave again at the Congress leader.

The bonhomie spilled over as workers and supporters of the Samajwadi Party and Congress appeared to cheer and wave their flags at each other.