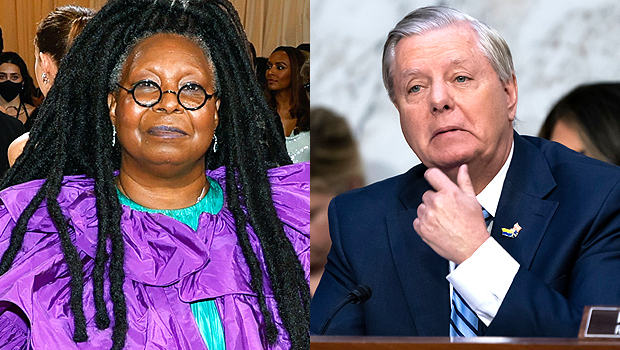 ‘The View’ host called out the Republican senator for asking Ketanji Brown Jackson about her faith and walking out of the hearing, saying how ‘None of this came up’ during his past confirmations for her.

Whoopi Goldberg didn’t hold back while calling out Republican Senator Lindsey Graham for questioning  Ketanji Brown Jackson‘s faith during her Supreme Court confirmation hearing on a Wednesday March 23 episode of The View. Before launching into the “Hot Topics” discussion, the show’s host showed the South Carolina asking Ketanji if she “attend[s] church regularly,” and Whoopi clearly thought the question was ridiculous, as Graham has voted in favor of confirming the nominee for other judicial positions in the past. “Lindsey Graham, you should be ashamed of yourself,” she said.

ARE GOP’S QUESTIONS FOR JUDGE JACKSON LEGITIMATE? After day two of confirmation hearings for Supreme Court nominee Judge Ketanji Brown Jackson, #TheView co-hosts and @IamLindseyG react to Sen. Cruz asking her if babies are racist and Sen. Graham asking about her faith. pic.twitter.com/RotJWCjdjY

After she called out the senator, Whoopi pointed not only to his past votes to confirm her, but the fact that he walked out while she was being questioned about her time representing detainees at Guantanamo Bay. “None of this came up the last three times. The last three times this woman came before you. You were fine with her. Suddenly, now you don’t know what you’re doing. The last time you voted for her, now you’re walking out,” she said.

Besides Graham questioning Ketanji’s faith, the show included portions of questioning from Sen. Marsha Blackburn asking her to define “woman” and Sen. Ted Cruz asking for her thoughts on the book Antiracist Baby. The View’s main co-hosts weighed in to say that it seemed like the Republicans knew that Ketanji was qualified, and were treating the hearing as “political theater,” as Sunny Hostin put it. She had also said that Cruz should also be “ashamed” of himself for his line of questioning over the book Antiracist Baby. Joy Behar also said that many of the questions were just for show. “That’s why they’re asking these dumb questions. So that they can have something to bring back to their constituency,” Joy said. “It’s an embarrassment to the country to vote against a woman of this caliber.”

Sara Haines also accused Graham of “trolling,” and asking questions about religion, because Democrats had asked Supreme Court Justice Amy Coney Barrett about her faith during her hearing, but she pointed out that those questions were more appropriate for her because Barrett “was on pro-life boards,” seemingly influenced by her religion. “They’re not going to vote on anything they hear in this hearing. They’re going to vote down party lines,” she said. “This was about campaigning for presidency. This was Cruz, Hawley, Graham—they’re all trying to ride on her coattails.”

Towards the end of the segment, Whoopi said that ultimately, the questions themselves didn’t bother her as much as the “tone,” which Republicans asked them in. “The thing I resent more than anything was their tone,” she said. “I don’t remember anybody else getting that kind of nasty, even Kavanaugh, who was being accused of something.”