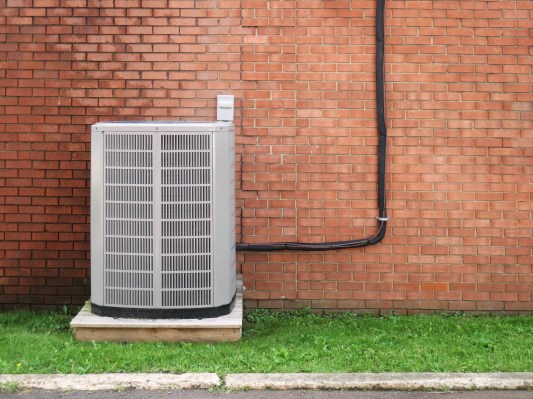 Air conditioners are a major source of greenhouse gases. On Project Drawdown’s 2017 list of over 100 opportunities to reduce human-caused global warming, cleaner tech for refrigeration and air-conditioning is at the very top.

From the 1930s to the 1980s, refrigerants posed two major environmental problems: They were extremely potent greenhouse gases and they damaged the ozone layer.

Thanks to some fast-moving legislation in the 1980s, we no longer use refrigerants that damage the ozone layer. In the Regreen Scale, which is inspired by the air quality levels that are used to track wildfires, we describe these ozone-depleting refrigerants as “Step 0” refrigerants.

Despite the progress of the 1980s, we still do use super-greenhouse gases as refrigerants. Every home air conditioner comes with a sticker on the side with detailed information about its refrigerant. The air conditioner in my backyard has 10 pounds of a refrigerant called R-410a (Step 1 on the Regreen scale). If all that refrigerant leaked out, it would cause as much global warming as burning 1,100 gallons of gasoline – in other words, 110 tanks of gasoline on a 10-gallon gas tank.

And, in all probability, at least some of the refrigerant will leak. Legally speaking, the U.S. Environmental Protection Agency requires homeowners to fix leaking air conditioners. But when I asked an air-conditioning technician about this, he told me that he responds to many calls per week to fix refrigerant leaks in air conditioners. In many cases, the air conditioner has already leaked so much refrigerant that it no longer cools the house. That refrigerant has leaked in the atmosphere, and it’s heating up our planet.

Could we use AI to invent a new refrigerant that can ‘vaccinate’ today’s home air conditioners from potent greenhouse gas emissions?

Not every type of refrigeration is as dirty as household air-conditioning. The European Union has banned super-greenhouse gases in new car air conditioners since 2017, and more than half of new cars in the U.S. now also use clean refrigerants.

But home air conditioners remain a gap in this legislation. As a homeowner who cares about the environment, I would love to install a central air conditioner that doesn’t use super-greenhouse gases. I would even be willing to be an early adopter and pay substantially more than the price of an ordinary air conditioner. But, to my knowledge, no such air conditioner is available to U.S. consumers.

Other industries like supermarket refrigeration and automotive air-conditioning have already made a lot of progress toward switching to clean refrigerants. In car air conditioners, the most popular refrigerant in the U.S. and EU is a refrigerant called R-1234yf (Step 4 on the Regreen scale), which from a global-warming perspective is thousands of times cleaner than the R-410a refrigerant that we use in home air conditioners today.

Further, in supermarket refrigeration, CO2 is an increasingly popular Step 4 refrigerant. CO2 is a greenhouse gas, but it is thousands of times cleaner than R-410a.

So, could the next generation of home air conditioners adopt one of these refrigerants that has worked so well at cleaning up other industries? To investigate this, I talked to University of Illinois Urbana-Champaign mechanical engineering professor Pega Hrnjak, who has spent the last 30 years studying technologies for refrigeration and air-conditioning.

First, could we use R-1234yf from the automotive industry in home air conditioners? According to Hrnjak, this would technically work, but there is a challenge. R-1234yf can’t be compressed as much as R-410a, so the tubing and other components of the R-1234yf air conditioner would need to be somewhat larger and more expensive.

Alternatively, a growing number of supermarket refrigeration systems use carbon dioxide as refrigerant, so how about using carbon dioxide in home air conditioners? Hrnjak said that “CO2 likes to be compressed more than R-410a, and this allows the tubing and other components to be smaller — and potentially cheaper — than an R-410 based air conditioner.”

What if there were a way to retrofit today’s air conditioners with a cleaner refrigerant? A few years ago, a group from the National Institute of Standards and Technology did a computer analysis of over 1 million potential refrigerants. Unfortunately, NIST didn’t find a perfect replacement for R-410a.

However, there are other angles to tackle this problem. First, there is the possibility of blending multiple refrigerants to create a replacement for R-410a. Second, in the years since the NIST study, AI systems have become more adept at discovering new molecules and materials. For instance, AI played a pivotal role in the rapid development of the Moderna COVID vaccine.

Could we use AI to invent a new refrigerant that can “vaccinate” today’s home air conditioners from potent greenhouse gas emissions?

To explore this, I talked to King Abdullah University of Science and Technology chemical engineering professor S. Mani Sarathy. Sarathy’s team has been using AI to predict the properties of hundreds of types of hydrocarbon molecules, which are used both as fuel and as refrigerant in small devices like refrigerators.

When I asked Sarathy whether his approach could help to develop cleaner refrigerants, he said, “We have already applied this approach to develop renewable fuels that burn cleaner than their fossil counterparts. I am optimistic that the same approach would work for considering millions of potential refrigerant molecules and accurately predicting their thermal properties. We could also optimize for low toxicity and low flammability.”