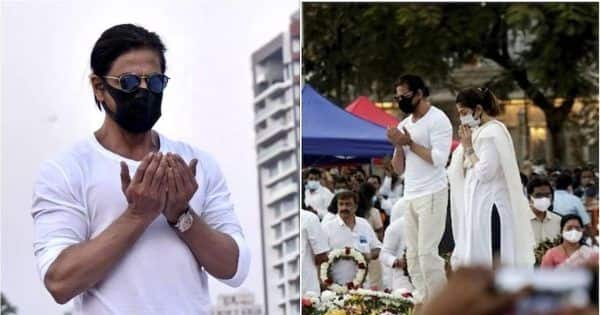 On Sunday, February 6, India woke up to a sad news about the passing away of Bharat Ratna and legendary singer Lata Mangeshkar at the age 92. She was given a public funeral with full state honours at Shivaji Park, Mumbai. Several Bollywood celebrities and top political leaders paid their last respects including Shah Rukh Khan who raised his hands in prayers for the departed soul. Also Read – Trending Entertainment News Today: Sanjay Raut defends Shah Rukh Khan; Alia Bhatt wants to work with Allu Arjun and more

But when did offering a prayer become a nationwide issue? Why so many people including the state in-charge of BJP Haryana, Arun Yadav, and BJP’s UP spokesperson Prashant Umrao, were so quick to falsely accuse SRK of spitting while paying the tribute? Call it a propaganda, or hate politics, with a sole purpose to disrupt peace and create communal tension all across. But, the bigger problem lies in the lack of knowledge of these hundreds and thousands of people who are easily swayed by their common misconceptions, myths and stereotypes about Muslims and Islam. Also Read – Lata Mangeshkar’s most expensive possessions, car collections and more the legendary singer left behind

Here’s debunking a few via common man who often becomes the victim of similar misconceptions.

Act of blowing air after dua

Explaining the act of blowing air after the dua, Mohammad Imtiaz, a resident of Aurangabad, Maharashtra, insists people to attend a Muslim funeral only once to understand its significance. “Reading a prayer and blowing air (like SRK did) is a traditional Islamic practice performed after the burial of the dead and for the soul to rest in peace,” he said.

Addressing the sterotypes faced in every day lives, Imtiaz cited his own example where certain people threw some random question on him, ‘Why do Maulanas grow beard?’ “The Prophet Muhammad and his companions have had a beard. So keeping the beard is holy and a sign of respect and obedience to the messenger of Allah,” he explained.

Tarique Khan, a resident of Nashik, Maharashtra, said that Shah Rukh Khan’s dua at Mangeshkar’s funeral is clearly misinterpreted. “It is a clear case of ignorance and lack of knowledge about Islam. Talking about another misconception that he comes across, Khan said, “As a personal experience, ‘Kafir’ which simply means ‘non-muslim’ or ‘non-believer of Islam’ is often misused and wrongly understood as ‘Muslims hate people of other religions’.
On the contrary, Muslims are taught to respect and be kind and charitable to everyone, even if their religious beliefs differ. A radical Muslim cannot be a Muslim, by definition.”

Raza from Delhi says he doesn’t get offended by random questions, for example, about ‘the concept of four marriages’ or ‘sacrificing of animals on one of the festivals’ thrown at him. He believes in using the opportunity to clear the misunderstandings by educating such people about the rituals that are carried out.

“The concept of four marriages is not a fashion or trend as misunderstood by even some Muslims as well. It was during the time of evolution of Islam when Prophet Mohammad (the messenger of God) and his army used to struggle and fight with the enemies. It was then that Prophet ordered his soldiers to marry – and give rights and respect to – as many as four women of the dead soldiers from enemy army to prevent them from becoming slaves and being exploited. Unfortunately, people have made it a trend and present it in a bad shadow. It obviously calls for weird questions and doubts from the non-Muslims,” he explained.

The practice of Qurbani

“Qurbani is sacrifice. It is a practice which goes back to the Prophet Ibrahim who was willing to sacrifice his only son Ismail for the sake of God. When Ibrahim agreed to follow the order, God intervened and sent a ram in Ismail’s place to be sacrificed. So sacrificing an animal – a goat, sheep, cow or camel – is to reflect Ibrahim’s obedience to God. Traditionally, the meat must be distributed to the poor while one third of the meat is kept for their family,” Raza concluded.