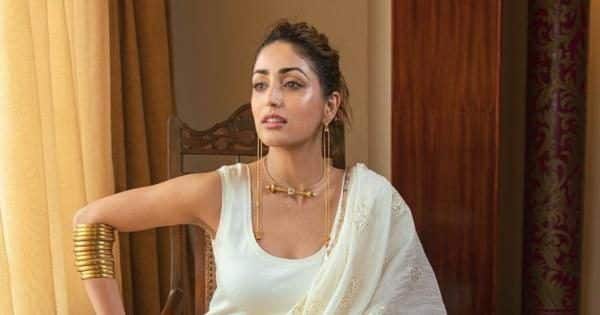 Yami Gautam is reveling in the good reviews she is getting for Dasvi. The actress is getting praise for her performance as Jyoti Deswal, a humanitarian jailor on the show. Yami Gautam has revealed how the industry tends to categorize celebs in an interview to the Indian Express. She said that there are few high end Bollywood designers who refused to lend lehengas to her for events. But she said that no everyone behaves in the same manner. Yami Gautam said that top designers refuse to give clothes to anyone and everyone. In Dasvi, she plays a jailor who helps Abhishek Bachchan (Ganga Ram Chaudhary) complete his tenth examination. Also Read – Deepika Padukone, Alia Bhatt and more: Actresses who boast of flawless skin and beauty secrets they swear by

Yami Gautam said that she has been lucky to get clothes from really good designers, who always support her. She said it was an entire system that categorized celebs. She told the paper, “I remember I heard that about myself once. That person said, ‘No, that lehenga is not for you’, and I was like ‘What, why?!’, and they said, ‘No, just doesn’t work with that designer’. It was so mean.” She said she did not understand the criteria to get clothes from a certain designer. She was like how could people make someone feel so bad. Yami Gautam further said, “But it’s not true for all designers, some of them are really good with their work and their attitude, but there is always a rotten apple.” Also Read – BTS PTD On Stage Las Vegas: From Grammys 2022 snub to marriage and kids, Kim Namjoon aka RM bares his heart out like never before in VLive

The actress spoke about how she decided she would not let anyone make her feel bad about herself. Yami Gautam said that she wanted to have her wedding in her own way. She married Aditya Dhar last year. Yami Gautam said she wore her mother’s wedding saree because of the emotional connect with it. It is also a heirloom. Yami Gautam said, “Our rituals were very important to me, absorbing everything that we were doing was of utmost importance to us, and we did that.” She was a simple Himachali bride on her wedding and social media heaped praises on her. Also Read – Ranbir Kapoor and Alia Bhatt’s honeymoon plans REVEALED; couple to head of to THIS exotic location post wedding