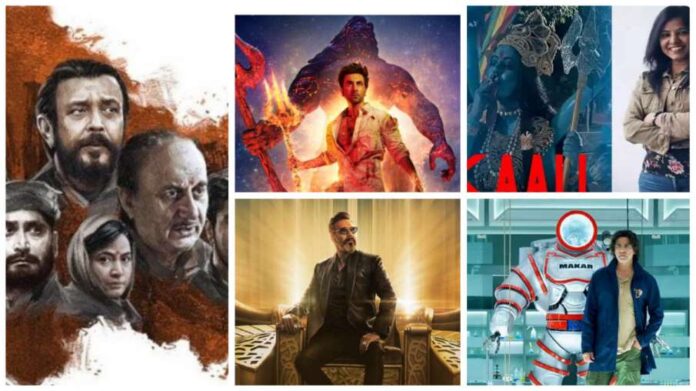 Year Ender 2022: The year 2022 will end in a few days. People are waiting for 2023 with new hopes. Some people had a good year while some had a very bad year. While some films proved to be superhit this year, some flopped badly at the box office. There are many such films in Bollywood cinema, which have faced the allegation of hurting sentiments before release. Many films like ‘Brahmastra’, ‘Kali’ ‘The Kashmir Files’ are included in this list. Let us know about the controversies related to the biggest films of the year 2022.

Indian filmmaker Leena Manimekalai shared a poster of her documentary ‘Kaali’, which sparked a lot of controversy. In this poster, Kali Maa was shown smoking a cigarette, after seeing which people got angry. Apart from the cigarette, the poster also featured the actress dressed as Kali Maa holding a trishul in one hand and the flag of the LGBTQ community in the other.

Vivek Agnihotri’s film ‘The Kashmir Files’, which is one of the blockbuster films of the year 2022, has been released for almost a year, but still this film is on the headlines. This film was liked a lot, but there was a lot of controversy about the film and this controversy is still going on. Let us tell you that in the year 1990, the oppression of Kashmiri Pandits in Kashmir was shown in the film. In such a situation, there was a nationwide controversy when Muslims were shown in the film. There were also reports of a clash between two groups due to the film. ‘The Kashmir Files’ was released across the cinema halls on March 11 this year. The story of the Hindu exodus and the killings of Kashmiri Pandits in the 1990s was shown in the film. The film is one of the highest grossing Bollywood films of 2022.

Aamir Khan and Kareena Kapoor Khan’s film ‘Lal Singh Chadha’ is also included in this list. Aamir Khan’s ‘Lal Singh Chadha’ was not given that much love by the people of India. Ulta boycotted the film because of which the film did not perform well in Bollywood. Aamir Khan’s film ‘Lal Singh Chadha’ was being boycotted even before its release. Kareena Kapoor Khan is also in the lead role with Aamir in this film. Whereas Aamir was accused of disrespecting the Indian Army and hurting their sentiments. Not only this, members of the Hindu outfit Sanatan Rakshak Sena protested against the film in Uttar Pradesh. He had demanded that Aamir’s ‘Lal Singh Chadha’ be banned all over India. Members of the organization accused Aamir Khan of hurting their religious sentiments.

Ajay Devgan and Sidharth Malhotra’s film ‘Thank God’ also faced controversies before its release. The makers of the film were accused by the people of Kayastha community of hurting their religious sentiments. Lord Chitragupta is shown in a suit in ‘Thank God’. The Kayastha community said that Ajay Devgan is seen with scantily clad girls in the film and this is an insult to Hinduism.

There was a lot of controversy after seeing the poster of the film ‘Adipurush’. Prabhas has appeared in the character of Lord Ram on the teaser of this film. Whereas Saif Ali Khan appeared in the role of Ravana. People believed that the look of Ravana and Lord Hanuman has been shown like Mughal. After much controversy, the makers had changed the look of Saif Ali Khan. Saif had a big beard in this teaser, which was causing a lot of controversy. People in social media also compared Saif to a demon. The makers had decided to shorten the beard from Saif Ali Khan’s look. The film was scheduled to release in theaters on 12 January 2023. But now this film will be released on 16 June 2023.

Akshay Kumar’s film ‘Samrat Prithviraj’ also had to face many controversies. Let me tell you that this film was based on the life of Emperor Prithviraj Chauhan. There was a lot of controversy regarding the title of the film, after which it was changed. Rajput organization and Karni Sena had protested a lot regarding the film.

Akshay Kumar’s film ‘Ram Setu’ also created a lot of ruckus before its release. BJP leader and former Rajya Sabha MP Dr. Subramaniam Swamy had filed a case against the actor and director regarding the film. He said that wrong facts about Ram Setu are being shown in this film. He tweeted and wrote that ‘I am suing actor Akshay Kumar and Karma Media for damages caused due to wrong portrayal of Ram Setu issue in their film’.