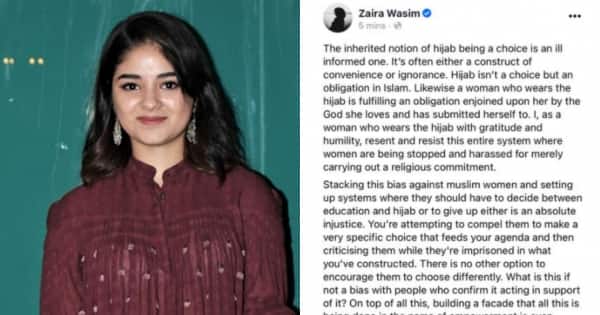 Zaira Wasim is the latest one to react to the Hijab Row that happened in Karnataka. The Hijab row has been a boiling controversy. Last month a couple of students were barred from entering classes for wearing a Hijab. A lot of celebs reacted to the controversy including Kangana Ranaut, Sonam Kapoor, Bella Hadid, Kamal Haasan, Javed Akhtar, Aly Goni, Swara Bhasker, Onir, Richa Chadha and more. And the latest to react to the Hijab row is The Sky Is Pink and Dangal actress Zaira Wasim. Zaira, who left the showbiz to practice her religion, penned a hard-hitting note on the Hijab controversy. Also Read – Dangal fame Zaira Wasim shares FIRST picture in two years after quitting Bollywood

Zaira said that the notion that wearing Hijab is a choice is an ill-informed one. She said that wearing a Hijab is an obligation in Islam, saying that by wearing a Hijab, a woman is “fulfilling an obligation enjoined upon her by the God she loves and has submitted herself to.” Zaira condemned the act that happened when the students were barred from entering the institute. She said, “I, as a woman who wears the hijab with gratitude and humility, resent and resist this entire system where women are being stopped and harassed for merely carrying out a religious commitment. Stacking this bias against Muslim women and setting up systems where they should have to decide between education and hijab or to give up either is an absolute injustice,” (sic). Also Read – Saqib Khan, Zaira Wasim, Sana Khan and other actors who quit showbiz to follow the spiritual path

Furthermore, Zaira said that by doing such a thing they are trying to impose and feed their agenda to them. “You’re attempting to compel them to make a very specific choice that feeds your agenda and then criticizing them while they’re imprisoned in what you’ve constructed. There is no other option to encourage them to choose differently. What is this if not a bias with people who confirm it acting in support of it? On top of all this, building a facade that all this is being done in the name of empowerment is even worse when it is quite exactly the opposite of that. Sad (sic)” Check out Zaira’s post here: Also Read – From Sana Khan to Imran Khan: 6 celebrities who quit Bollywood and opted for a different path

Zaira decided to quit Bollywood after the Sky Is Pink. Taking about the Hijab row, Sonam Kapoor had shared a collage of a man in a Turban and a woman in a Hijab and asked If wearing Turban is a choice then why can’t it be the same for Hijab.