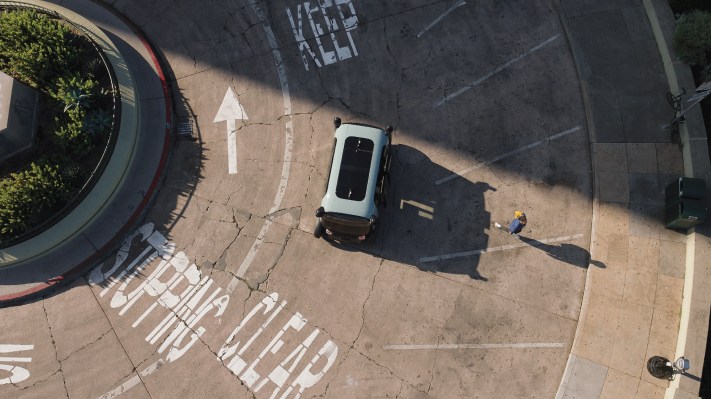 Zoox has built dozens of custom-built electric robotaxis and is testing them in one or more “semi-private courses” in California, according to the company’s co-founder and CTO Jesse Levinson.

“We have dozens of them — not hundreds yet, but it’s it’s very far into the double digits, said Levinson, referring to the total number of robotaxis built and in testing.

The disclosure, which came up in a wide-ranging interview with media, suggests that the Amazon subsidiary is ramping up in preparation to begin testing its electric robotaxis on public roads. Zoox currently tests Toyota Highlander vehicles equipped with its self-driving system in San Francisco, Las Vegas and Foster City, California, near its headquarters. Those vehicles all have human safety drivers behind the wheel.

Zoox plans to launch commercially with its purpose-built autonomous vehicle, which is loaded with sensors, can drive bidrectionally, has four-wheel steering and is capable of transporting four people at speeds of up to 75 miles per hour.

The company unveiled the cube-like vehicle in December 2020, before largely disappearing from public view. It turns out this vehicle is being tested on open roads in campus-like settings. Lewison wouldn’t disclose exactly where the robotaxis are, but said it was not a closed campus with only Zoox employees.

“You can imagine, you know, campuses or research facilities,” he said. “What I mean by open roads is that the people that we’re interacting with, whether they’re bicyclists, pedestrians, (other) vehicles, they’re not other Zoox agents. It’s not like a closed Zoox campus.”

He later added that these campuses are not yet fully public routes.

Levinson nor a Zoox spokesperson would say when the company plans to test its custom-build robotaxis on public roads. Levinson said it is the next step, which is “really not that far away,” he said, adding “we’re not talking about years.”

In the meantime, the company continues to build the robotaxis at its factory 150,000-square foot factory in Fremont, California.